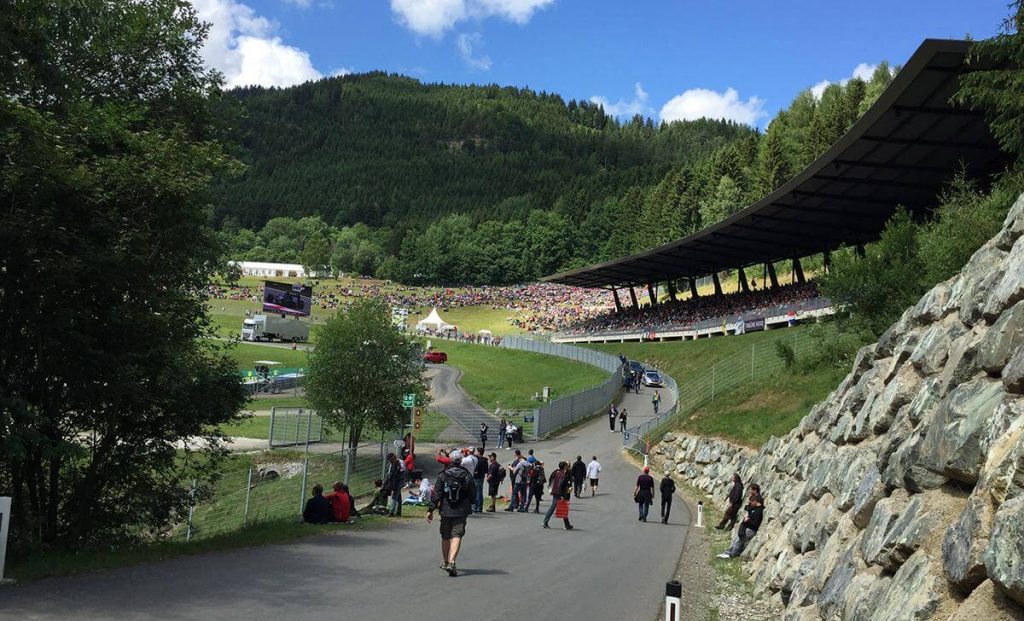 The Austrian Grand Prix returned to the Formula 1 calendar in 2014 after an eleven-year hiatus. It’s hosted at the picturesque Red Bull Ring, the most recent incarnation of the Österreichring circuit, which debuted back in 1970.

The original Österreichring circuit, measuring just under 6km, was comprised of a series of high-speed corners and elevation changes with little in the way of run off areas. American driver Mark Donohue lost his life following an accident in 1975, prompting the addition of a chicane to slow speeds on the fastest section of the circuit. Nevertheless, the Österreichring remained frighteningly fast; in 1987, Nelson Piquet’s pole lap averaged a blistering 159.457 mph (255.756 km/h). In the same year, the deficiencies of the circuit – notably the narrow start-finish straight – were highlighted by two huge crashes on the opening lap, which saw the race restarted twice. This was the final nail in the coffin for the original circuit, which was deemed unsafe for the era’s hugely powerful turbo cars. The Österreichring lost its place on the F1 calendar in 1988 and wouldn’t return for another ten years, despite updates to the circuit in the interim years, including the widening of the pit straight and the redesign of the fearsome Bosch Curve.

When it did return in 1997, the circuit had a new layout and a new name, the A1-Ring, thanks to its funding from a telecommunications company. Hermann Tilke, the track designer known for designing many of today’s F1 tracks, went to town on the original layout. It was in fact Tilke’s first major commission. Few of the fast, sweeping corners were retained for the shortened 4.3km circuit. The A1-Ring hosted seven Austrian GPs between 1997-2003, with two wins apiece for Mika Hakkinen and Michael Schumacher.

The A1 Ring was not a money maker however, and was removed from the calendar for 2004 because of Austria’s support for anti-tobacco legislation in the EU. Enter Dietrich Mateschitz, the founder of Red Bull, who purchased the circuit and announced big redevelopment plans. No sooner had work got underway however, including demolishing the existing pit buildings, when local authorities upheld environmental complaints and halted work on the track. It remained idle for six years until Mateschitz finally completed a less ambitious revival of the circuit. The newly named Red Bull Ring opened in 2011. It wasn’t too long before Mateschitz persuaded Bernie Ecclestone to sign a new seven-year Formula 1 hosting contract. The first race was staged in 2014 and attracted a sell-out crowd.

The Austrian Grand Prix has remained a popular round of the World Championship since re-joining the calendar, attracting as many as 200,000 spectators over the 2019 race weekend. In stark contrast, as a result of the coronavirus pandemic, the 2020 Austrian Grand Prix was the first F1 race to be held behind closed doors. The Red Bull Ring hosted the highly-anticipated first round of a much delayed season, and made history by hosting a second successive race on the following weekend. While Valtteri Bottas won the season-opening Austrian Grand Prix, Lewis Hamilton clinched the first victory of his seventh title-winning year at the one-off Styrian Grand Prix.