Autodromo Imola holds a special place in Formula 1 folklore. The scene of fabled rivalries, Imola has played host to both triumph and tragedy since joining the calendar in 1980. Since 2020, the Italian circuit has been the home of the Emilia Romagna Grand Prix.

Situated 40km east of Bologna, in the Emilia-Romagna region of Italy, Imola first hosted a round of the Formula 1 World Championship in 1980. The circuit appeared as host ofstaged the Italian Grand Prix once before securing an annual spot on the calendar with as home of the San Marino Grand Prix between 1981 and 2006. After a fourteen year absence, Imola returned to host the Emilia Romagna Grand Prix in 2020.

The origins of the Imola circuit can be traced back to the end of the Second World War. Following the war, in an attempt to boost the local economy, it was proposed that a new road should be built linking the existing public roads. The town of Imola is located in an area known as ‘Motor Valley’, where many prominent Italian car manufacturers’ factories are based. It was suggested that the new road could be used for the manufacturers to test their new prototypes.

Construction began in 1950, easing unemployment rates in the local area. In 1952, F1 World Champion Alberto Ascari became the first driver to complete a lap of the track in a Ferrari. The Imola circuit opened as a semi-permanent venue in 1953.

With Monza undergoing renovations, Imola was called upon to host the Italian Grand Prix in 1980. This, however, was not the first time F1 machinery had powered around the track. The very first F1 race at Imola actually took place in 1963. The non-championship Imola Grand Prix was won by Jim Clark, who lapped almost the entire field on his way to victory. Three previous “Imola Grands Prix” had been held in the 1950s, but these were sports car races.

Sixteen years on from the non-championship F1 race held at the circuit in 1963, another non-championship race took place in 1979. This event was called the Dino Ferrari Grand Prix and was won by Niki Lauda. 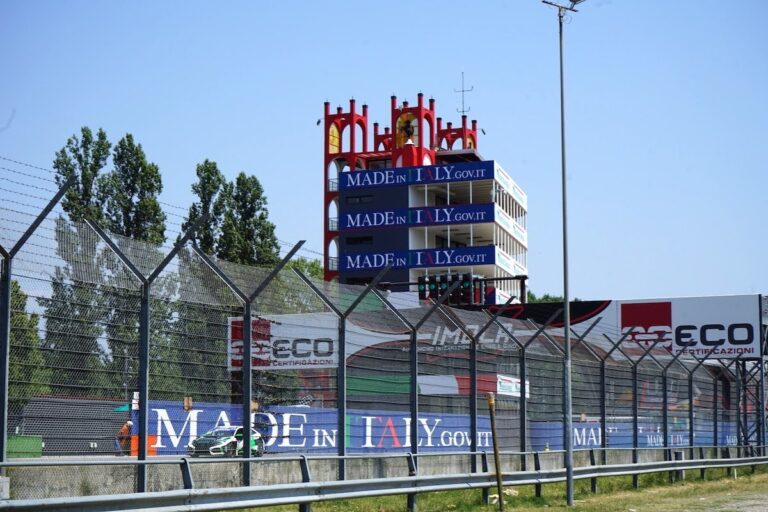 Following the success of the 1980 Italian Grand Prix, Imola became a permanent fixture on the F1 calendar. The venue hosted the San Marino Grand Prix every year between 1981 and 2006, meaning that there were two races in Italy each season. The fast paced, anti-clockwise circuit was a hit with both drivers and fans. Legendary names such as Alain Prost, Ayrton Senna, Nelson Piquet and Nigel Mansell dominated at the venue throughout the 1980s and into the early 1990s.

Formula 1 endured one of its darkest weekends at Imola in 1994. Following a violent crash for Rubens Barrichello in Friday qualifying, in which the Brazilian was lucky to escape without serious injury, Roland Ratzenberger lost his life following a similarly severe accident during Saturday’s qualifying session. The 33 year old Austrian was only attempting to qualify for the third time in F1 with the Simtek team.

In the Grand Prix, three-time World Champion Ayrton Senna died as a result of a heavy crash at the Tamburello corner. There had been numerous crashes at this corner previously, notably for Nelson Piquet in 1987 and Gerhard Berger in 1989. Senna’s death brought the media spotlight onto the safety of Formula 1 and resulted in a number of immediate changes to the sport. Senna would be the last driver to die as a result of a crash in a Formula 1 race until Jules Bianchi over twenty years later. 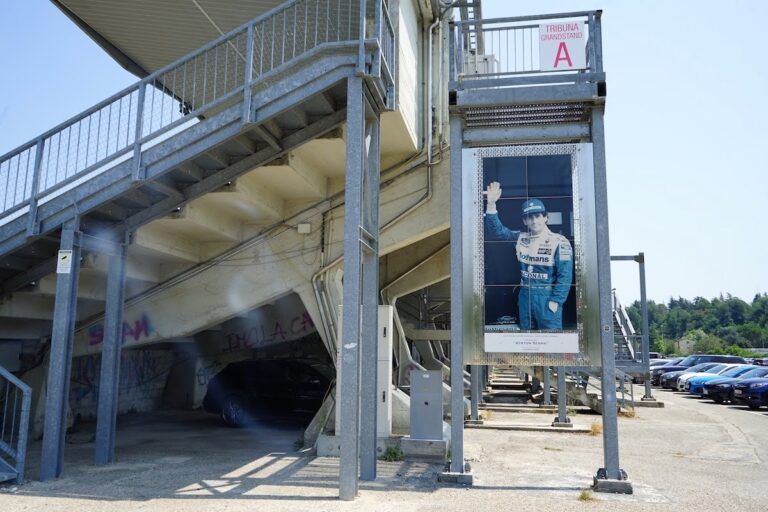 The Imola circuit itself was re-profiled following the tragic events of the 1994 San Marino Grand Prix weekend. Tamburello, once a ferocious flat out bend, was transformed into a chicane. There were further changes to the Villeneuve and Tosa corners in the biggest modification to the track layout since the venue opened.

The latter years of the San Marino Grand Prix

For some, Imola lost its spark following the 1994 San Marino Grand Prix. Track changes made the circuit a shadow of its former self. Nevertheless, the event remained popular, especially among Ferrari fans. 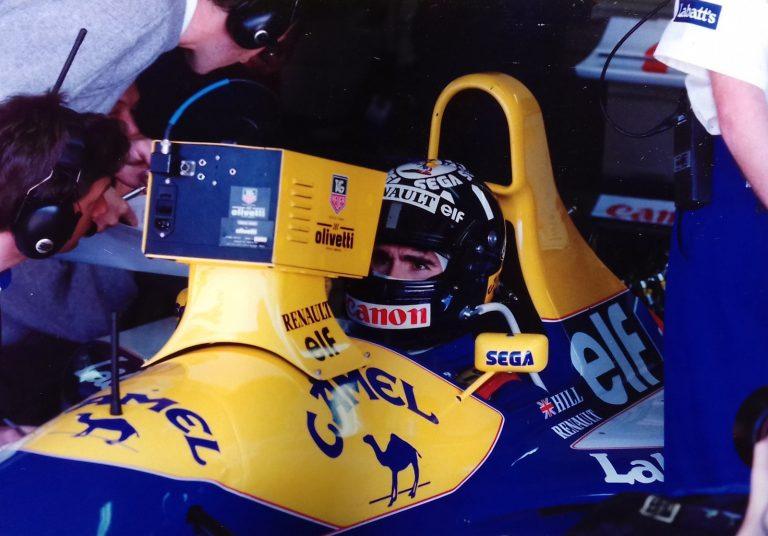 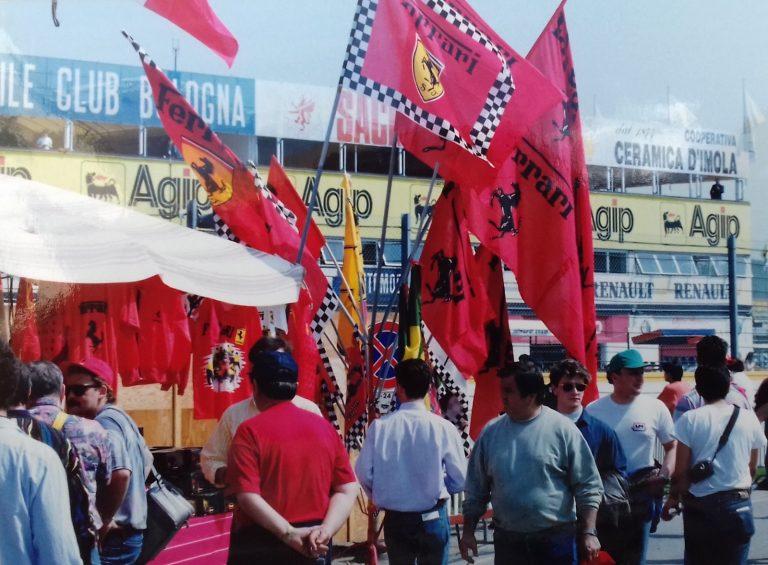 The Tifosi considered Imola as Ferrari’s home circuit when it was on the calendar, given that it is situated within 100km of the Scuderia’s Maranello factory. Between 1999 and 2006, at the height of Ferrari’s domination of Formula 1, Michael Schumacher delighted the Tifosi with six victories at the San Marino Grand Prix.

Following F1’s departure, the track underwent major renovations. In a project overseen by Hermann Tilke, the garages and paddock area were demolished and new, more modern facilities were built in their place. The track was also altered, with the final chicane – Variante Basse – removed, making the run along the pit straight between Rivazza and Tamburello much faster. Formula 1 finally returned to Imola in 2020 amid the coronavirus pandemic. The circuit was added to the calendar as a replacement for other cancelled events. The Imola race was given a new title for its return – the Emilia Romagna Grand Prix. Originally intended to be a one-off return, the event was held again in 2021 as a replacement for the Chinese Grand Prix.

Imola will be on the calendar once again in 2022, hosting the fourth round of the season. With the last two races at the circuit taking place behind closed doors, the 2022 Emilia Romagna Grand Prix is set to be the first F1 race at Imola with fans in attendance since 2006. Despite rumours of a longer-term contract for Imola to remain on the calendar until 2025, the circuit’s tenure on the schedule is not confirmed beyond 2022.

Tensions rose at Ferrari during the 1982 San Marino Grand Prix. Gilles Villeneuve and Didier Pironi went wheel-to-wheel behind the Renault of Rene Arnoux. With Arnoux later retiring, the Ferrari pairing’s fight became the battle for victory. With a 1-2 finish in sight, Ferrari instructed both of their drivers to slow down. While race leader Villeneuve interpreted this as an instruction to maintain position, Pironi did not. The Frenchman overtook his team-mate and went on to win the race. Villeneuve vowed to never speak to his team-mate again. The Canadian died two weeks later in qualifying for the Belgian Grand Prix. Their fallout was unresolved.

Gerhard Berger suffered a spectacular crash at the 1989 San Marino Grand Prix. On the fourth lap of the race, Berger’s Ferrari left the track at the Tamburello corner. Crashing at 180mph, on a full fuel load, the Ferrari burst into flames. The race was red-flagged as a result. Berger survived the impact and subsequent fire, butfire but missed the next race after while recovering from suffering broken ribs and second-degree burns.

One of the defining moments in Fernando Alonso’s maiden title-winning season took place at Imola. The 2005 San Marino Grand Prix is remembered for an epic duel between Alonso and rival Michael Schumacher. Schumacher stalked the Renault driver throughout the closing stages of the San Marino Grand Prix, but despite his best efforts, Alonso kept his cool and secured the win.

Mercedes’ protégé George Russell and Mercedes driver Valtteri Bottas came to blows at the 2021 Emilia Romagna Grand Prix. On the slippery track, Russell attempted to overtake the Mercedes on the run to the Variante Villeneuve. However, Russell dipped a wheel onto the grass and speared into the side of his one-time teammate. Russell was unimpressed with the incident, claiming that Bottas moved into his path. The Williams driver later apologised to the Finn.

What are your favourite memories of Imola? Leave a comment below!