Formula 1 has announced the cancellation of the 2022 Russian Grand Prix following Russia’s invasion of Ukraine.

Formula 1 will not race in Russia in 2022 following the country’s invasion of Ukraine. A statement released by F1 on Friday said that it was “impossible” to hold the event given the current circumstances. Russian President Vladimir Putin has close links to the Russian Grand Prix and attended the event every year between 2014 and 2018.

F1, the FIA and the teams met on Thursday evening in Barcelona to discuss the developing situation, where the decision was made to cancel the event:

“The FIA Formula 1 World Championship visits countries all over the world with a positive vision to unite people, bringing nations together. We are watching the developments in Ukraine with sadness and shock and hope for a swift and peaceful resolution to the present situation. On Thursday evening, the FIA, and the teams discussed the position of our sport, and the conclusion is, including the view of all relevant stakeholders, that it is impossible to hold the Russian Grand Prix in the current circumstances.”

The 2022 Russian Grand Prix was scheduled to take place on September 25 and was set to be the final time F1 would visit Sochi Autodrom. From 2023, the event was contracted to move to Igora Drive – a new Herman Tilke-designed venue near Sosnovo in the Priozersky District.

Haas and Mazepin in the spotlight

On Friday at pre-season testing, the Haas team ran in an all-white livery, removing branding from their Russian sponsor Uralkali. The team say that a decision on the future of their title sponsor will be made next week.

Uralkali is part-owned by Dimitry Mazepin, father of Haas driver Nikita Mazepin, who is due to compete in his second season with the team. However, Mazepin’s place at the team is now believed to be in doubt. In a statement on Twitter, Mazepin said that it is “a difficult time”. Mazepin competes under a neutral flag following Russia’s ban from World Championship competitions after the doping scandal at the 2014 Winter Olympics.

Sebastian Vettel and Max Verstappen were among the drivers who had already called for the Russian Grand Prix to be cancelled. Speaking in a press conference yesterday, Vettel stated that he would not attend the event if it were to take place this year while Verstappen said it would not be correct to race in the country.

Tickets for the 2022 Russian Grand Prix had been available since January but were removed from sale on the official Formula 1 website yesterday. A likely replacement for the event is the Turkish Grand Prix, which was held at Istanbul Park in both 2020 and 2021. 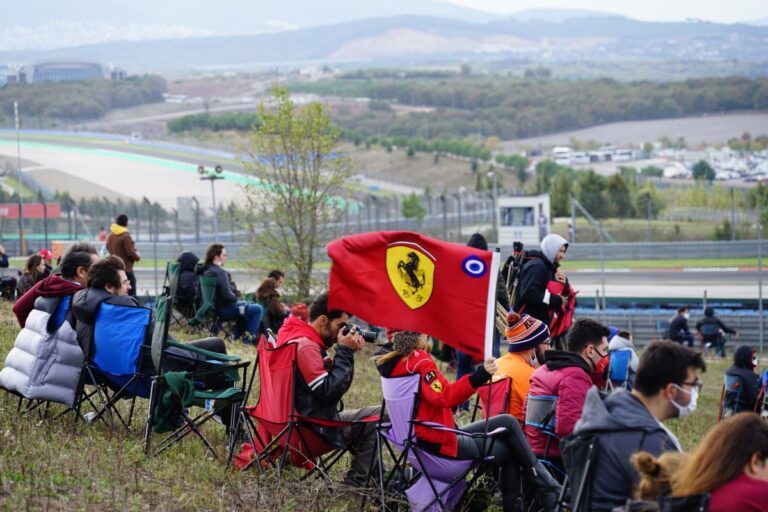 Last year’s Turkish Grand Prix attracted 190,000 fans, with the event open to spectators for the first time since 2011. A page promoting tickets for the 2022 Turkish Grand Prix briefly appeared on the official Formula 1 website, but has since been removed.