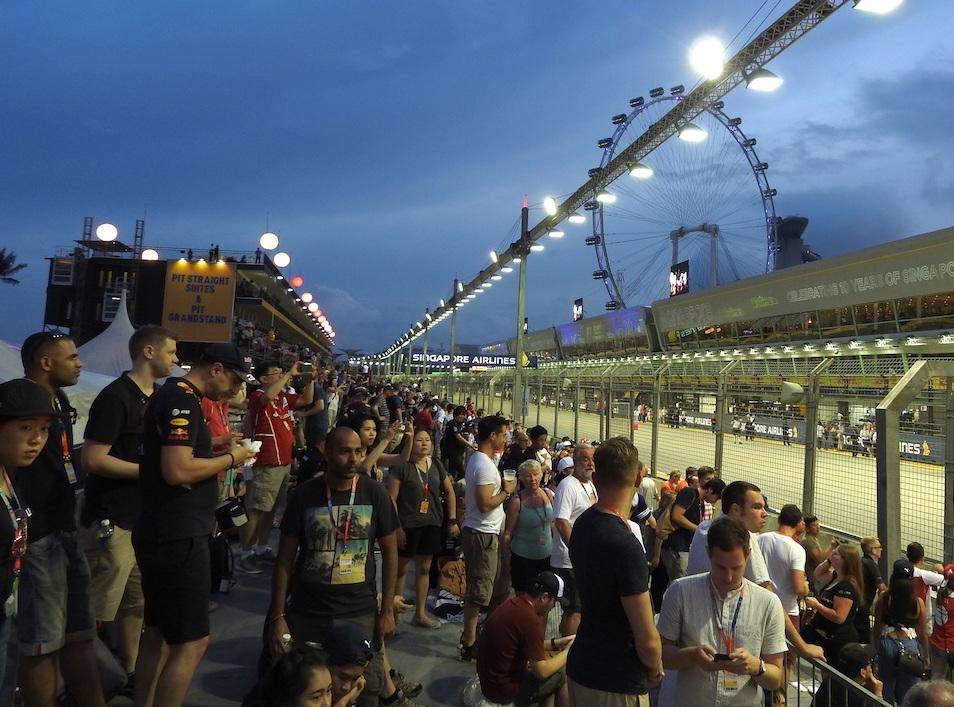 This September saw the tenth running of the Singapore Grand Prix. Despite some lingering doubts about its future, a new 4-year contract was recently announced that will see it remain on the F1 calendar until at least 2021. We went along this year to see what the fuss is all about. Here’s our top ten reasons why the Singapore GP rocks, in no particular order.

1. It has the best trackside atmosphere

There’s a reason why the Singapore GP attracts an estimated 30,000-50,000 international F1 fans annually. It’s hard to beat the atmosphere of a race held under lights in the middle of one of the world’s most vibrant cities. You can feel the excitement of fans everywhere you go in the center of Singapore on race weekend, which is rare these days when most races are held at purpose-built facilities outside of the city.

2. It's the original night race

Singapore was the first F1 race to sign up A-list stars for race weekend concerts. This year’s lineup featured Calvin Harris, Ariana Grande, Duran Duran, OneRepublic, Seal and The Chainsmokers, as well as a host of other performers on multiple stages around the Marina Bay Circuit. The largest concerts take place on the Padang Stage, which can accommodate up to 65,000 fans. Since kicking off in 2008, headliners have included Kylie Minogue, The Killers, Robbie Williams, J-Lo, Rihanna, Justin Bieber, Katy Perry, Mariah Care, Linkin Park and Pharrell Williams. The Singapore GP concerts have proved such a success that other races – notably Abu Dhabi, USA and Azerbaijan – have followed suit, booking A-list stars for their own race weekend concerts.

Singapore boasts an excellent transport infrastructure, as you would expect. So even if you cannot afford a trackside or city-center hotel, you will only be a short MRT (metro) or bus ride away from the circuit, not to mention the other attractions on offer in the center of the city. You can buy an affordable Singapore Tourist Pass for unlimited public transport rides, and MRT services are extended on Grand Prix weekend. Learn more here.

5. The organization is world class

Our Singapore GP guide does not attract as many eyeballs as some of our other guides. Why? Because the organizers do such a good job of providing useful information to fans. From survival guides to a detailed website and useful app, not to mention thousands of young crew members all over the circuit grounds, the Singapore GP organizers go out of their way to make sure fans have the best experience possible.

6. The food is delicious

Forget overpriced hot dogs and soggy fries, the Marina Bay circuit and surrounds offers a melting pot of ethnic cuisines including Chinese, Malay, Thai, Indonesian and Indian specialties. The food vendors inside the circuit are a little on the pricey side, but you are never far from one of the city’s famous Hawker centers, where you can buy cheap local favorites such as a hot pot, Hainanese chicken rice or Hokkien mee. At the higher end, there are plenty of restaurants (many within 5-star hotels) with Michelin-star quality food and exceptional city views.

7. The nightlife is outstanding

Singapore really comes alive at night on race weekend. There’s no shortage of bars, clubs and rooftop hotspots where you can party until the small hours. At the higher end, the Amber Lounge puts on an F1 fashion show on Saturday night and party with F1 drivers and celebrities after the race on Sunday. In a similar vein, the Podium Lounge takes over the grand ballroom of the Ritz Carlton for F1-themed parties all weekend. For the best rooftop views, head to 1-ALTITUDE at the top of the 1 Raffles Place skyscraper for “The Circuit” parties or CÉ LA VI at the top of Marina Bay Sands. Bookings are recommended! If you are interested in more down-to-earth partying, head to Boat Quay or Clarke Quay for a great selection of bars and cheaper drink prices. Learn more here.

8. The possibilities for extended holidays are endless

Singapore is one of the world’s top 5 most visited cities, attracting over 13 million overnight guests a year. With a host of top-class tourist attractions, Singapore is a destination in its own right. It’s also one of the world’s biggest airport hubs, with 58 million travelers passing through Changi Airport each year. There are hundreds of incredible destinations on your doorstep, from the beaches of Thailand to the temples of Myanmar and beyond. Don’t just come to the race, plan a holiday around it!

Many of Singapore’s best 5-star hotels are located close to the track. Most teams and F1 personnel stay at the Pan Pacific or Ritz Carlton, which are only a 5-minute walk from the F1 paddock. Other options include the Fullerton Hotel, housed in a historic building overlooking Boat Quay and Marina Bay Sands; it’s three towers overlook the circuit, as does the infinity pool on the highest level. Just make sure you get one of the rooms facing the track! If you can’t afford a room with a view of the track, we still recommend staying centrally. There’s plenty of affordable hostels and budget hotels within walking distance of the circuit, especially around Boat Quay and Chinatown. More info here.

The 19th and final Malaysian GP at the Sepang circuit was held two weeks after the Singapore GP this year. Although the Malaysian event was never particularly successful, it’s demise was perhaps hastened by the decision to pair it back-to-back with Singapore from last year. There has been some talk about new races in Vietnam or Thailand, but for now Singapore is the only race in the SE Asian region, which is home to some 650 million inhabitants.

Read our detailed travel guide to the Singapore Grand Prix.

1 thought on “Ten reasons why the Singapore Grand Prix rocks”