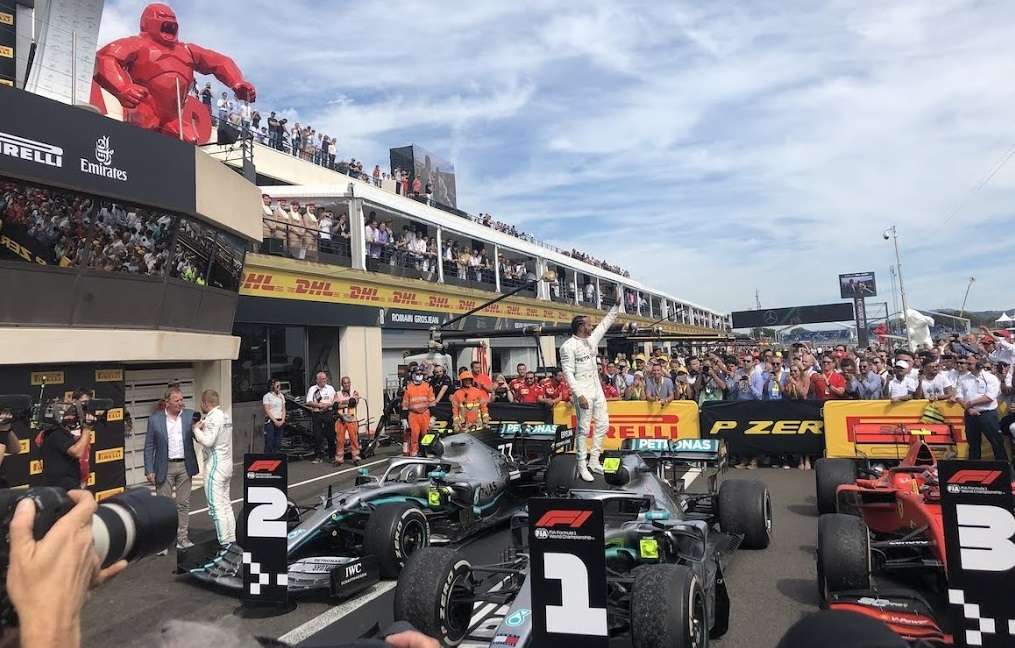 France was the birthplace of modern Grand Prix racing over 100 years ago, but was absent from the calendar from 1999-2017. The race returned to Circuit Paul Ricard in 2018 after a 25 year absence.

Organized motor racing originated in France during the last years of the nineteenth century, but modern Formula 1 racing can be traced back to the first running of the French Grand Prix on a 103-kilometer circuit near Le Mans in 1906. The term Grand Prix translates as ‘Grand Prize’ in French and refers to the 45,000 Franc prize money paid to the winner of the race. As the Franc currency was pegged at 0.290 to the price of gold, the winner of the inaugural French Grand Prix received the equivalent of 13kg of gold!

The French Grand Prix has been staged on sixteen circuits over the years. Early circuits were comprised of mainly public roads, including the first running on the legendary Le Mans road course in 1921 and several deadly one-off events that that took the lives of both competitors and spectators. It wasn’t until 1925 that the first dedicated circuit was built, south of Paris. The 12.3 kilometer L’autodrome de Linas-Montlhéry featured 51-degree banking and hosted the French Grand Prix eight times between 1925-1937. Another legendary venue was the Reims-Gueux circuit in the Champagne region of north-east France. This circuit first hosted the French Grand Prix in 1938 and also featured in the first year of the modern Formula 1 World Championship in 1950. The last race at Reims-Gueux in 1966 was won by Australian Jack Brabham.

In 1971, the French Grand Prix moved to the newly-built Paul Ricard circuit near Marseille, which was named after (and financed by) the eccentric millionaire famous for Ricard, an anise and licorice-flavored aperitif. The original 5.8km circuit was dominated by the long Mistral straight. Coupled with other high-speed sections, it was notoriously hard on F1 engines, which often failed after being subjected to full revs for much of the lap. The Paul Ricard circuit hosted 14 editions of the French Grand Prix between 1971 and 1990, and has also been a popular venue for winter testing due to its mild climate and airstrip. Since 1999, the Paul Ricard circuit has been owned by the family trust of ex-F1 boss Bernie Ecclestone.

From 1991-2008, the French Grand Prix found a new home at the Circuit de Nevers Magny-Cours (or simply Magny Cours) in the center of the country. The track had been built in 1960, but fell into disrepair in the 1980s before being rejuvenated by the local government and winning the contract to stage the French Grand Prix. The circuit was a favorite of Michael Schumacher, who won a record eight races at Magny Cours between 1994-2006. Suffering from low spectator numbers due to its remote location and poor access, the death knell for Magny Cours was signed in 2008 when the French Motorsports Federation (FFSA) withdrew its financing for the event.

Fast forward ten years and the French Grand Prix returned to the Formula 1 calendar in 2018. A five-year deal to stage the race at Paul Ricard was announced in late 2016 by Christian Estrosi, President of the Regional Council of Provence-Alpes-Cote d’Azur, who promised the event would be an important driver of economic development and tourism for the region.

1989: First lap crash: The 1989 French Grand Prix at Paul Ricard is best remembered for a huge first-corner crash caused by Mauricio Gugelmin in the Leyton House, who locked his brakes and hit the back of Thierry Boutsen’s Williams. The Leyton House ended upside down on Nigel Mansell’s Ferrari, and the race had to be restarted.

1990: Almost a surprise winner: One year after his dramatic first lap crash, Gugelmin and his Leyton House team-mate Ivan Capelli almost caused an upset. The pair ran 1-2 for much of the race before Alain Prost overtook them both. Gugelmin retired with a blown engine, while Capelli also suffered engine problems three laps from home, allowing Prost to take a home victory. Capelli still finished on the podium though, and scored the only podium finish for the Leyton House team. It was particularly remarkable, considering both cars had failed to qualify for the previous round of the championship!

2000: Coulthard’s best race: David Coulthard was embroiled in a hard fought battle with Michael Schumacher for victory in the 2000 French Grand Prix at the Magny Cours circuit. Schumacher had pulled out an advantage in the opening stages of the race, but Coulthard managed to reel the German back in. The Scotsman attempted an overtake, but Schumacher defended and the McLaren driver lifted off to avoid a collision. Disgruntled, Coulthard made a gesture toward the Ferrari man, for which he later apologised. He eventually took the win by almost fifteen seconds. Coulthard often cites the victory as the best of his career.