Charles Leclerc stormed to victory in the first Grand Prix of Formula 1’s new era. Recording the third win of his career, Leclerc was joined on the podium by team-mate Carlos Sainz, who gave Ferrari their first 1-2 finish since the 2019 Singapore Grand Prix.

Leclerc’s victory was witnessed by a record-breaking Bahrain Grand Prix race day crowd. 35,000 fans were in attendance at Bahrain International Circuit, 2,000 up on 2019’s previous record figure. Tickets for the Main Grandstand and the Turn 1 Grandstand sold out ahead of the race weekend. The 2022 Bahrain Grand Prix was the first race at the track to be open to a full capacity crowd since the coronavirus pandemic began.

Speaking after the race on Sunday, circuit Chairman Arif Rahimi said that local interest in the sport is “ever-increasing”:

“I congratulate Charles Leclerc and Ferrari on a wonderful victory under the lights at BIC. The interest we have seen from fans from all over the world for our 2022 race has been overwhelming, leading to our highest race day attendance in our history. There can be no doubt that Formula 1 is in a great place, with ever-increasing fan interest in Bahrain, the region and beyond.”

In addition to a record-breaking Sunday crowd, the circuit also reported its highest ever Friday attendance figure, plus a surge in international visitors. Speaking at a news conference in January, race organisers had already noticed a large increase in tickets sales in the Netherlands, with Dutch fans making the journey to support Max Verstappen in his first race as World Champion. It is estimated that around 35% of race tickets were sold to international visitors. 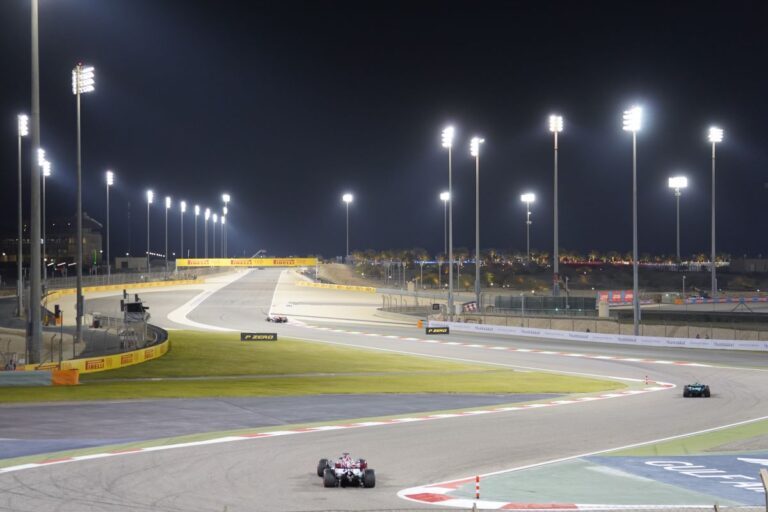 Sadly for the Dutch fans, the Red Bull driver’s race didn’t go to plan. After battling with Leclerc for the lead throughout the Grand Prix, a fuel pump issue forced Verstappen into retirement just a handful of laps from the chequered flag.

Looking to the future

Bahrain recently singed a contract extension – believed to be the longest in F1 history – which will keep the Bahrain Grand Prix on the calendar until at least 2036.

As part of the circuit’s new deal, race organisers have committed to F1’s vision for the sport to be net zero carbon by 2030. Over the race weekend, it was announced that the circuit’s new onsite solar production facility was completed ahead of schedule. Formula 1 CEO Stefano Domenicali labelled it “an important milestone” in F1’s journey towards a greener future.

Bahrain may not be 2023 season-opener

The Bahrain Grand Prix has featured in the season-opening slot on the Formula 1 calendar in both 2021 and 2022 – but RacingNews365’s Dieter Rencken reports that the event may move in future seasons’ calendars.

In 2023, Ramadan begins on March 22 and will fall progressively earlier over the next three years. Races in the Middle East will therefore need to scheduled respectfully. It is possible that the 2023 F1 season could start a week earlier than in 2022, on March 12, thus avoiding a clash. Ramadan is more likely to affect the race’s slot on the calendar in 2024.

Did you attend the 2022 Bahrain Grand Prix? Leave a comment below!